And that’s just one factory! Consecutive years (2013-2014) of significant growth in home-appliance sales had the Whirlpool Cleveland (TN) premium cooking operations plant pushing hard to keep up with demand. The welcomed flood of work, however, contributed to a perfect storm that kept managers on their toes to stay atop the rising tide of activity.

First, the plant was relatively new and experiencing some growing pains. Christened in 2012, the showcase facility welcomed hundreds of new employees, creating a training challenge. And, thousands of stamping dies were moved in, along with dozens of presses with varying tonnage capacities.

Moving several production lines across town and adding new processes in the new facility, all while keeping up with consumer demand for the plant’s premium cooking products was a significant task. Achieving the task included much hard work, and the plant was rewarded with steadily improving productivity measures.

Says fabrication manager Jim Stewart: “While a lot of our measures have improved significantly this year, we recognized several opportunities for even further improvements in a number of areas.”

Easy to retrofit with little to no modifications.

“We’re averaging more than 100,000 changeovers per year,” says Stewart. “The new clamping nuts have decreased our die-change times by at least 4 min. per change.” 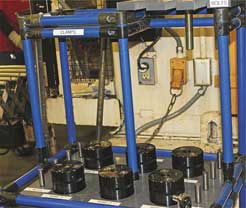 The team set out to bring continuous improvement in areas including:

Chief among the die-change-related action items was improving the process for die clamping and unclamping. Challenges here included ensuring consistent torque when tightening bolts, and finding a tightening/untightening method independent of operator size and strength.

“We’re averaging more than 100,000 changeovers per year,” says Stewart. “On our six-press stainless line, for example, we might change each press 50 times per week—offering a huge opportunity for increasing efficiency.” The plant’s press-shop team took its mission to improve die-change efficiency to FABTECH 2014 in Atlanta, and struck gold at the booth of Carr Lane Roemheld Mfg. Co. That’s where Stewart and his team discovered Hilma hydromechanical

clamping nuts that, when compared to traditional T-bolts, require a fraction of the torque to secure a die. Soon after returning from the exhibition, Stewart submitted a purchase order for dozens of the Hilma nuts.

Using the new clamping nuts, which fit in 90 percent of the facility’s dies without requiring modification, couldn’t be simpler. The setter slides the T-bolts and clamping nuts into the slots on the press bed, then hand-tightens the nuts to secure them against the die. He then makes one or two turns with a 6-in. ratchet to reach the required torque.

“In all, we’ll invest several thousands of dollars per press to employ the hydromechanical nuts,” he shares. “And we plan to put them on every press. That’s a big investment (360 clamp nuts, rated to 22,400 lb. of clamping force, along with 360 1- by 6-in. bolts), but we expect immediate payback in terms of time savings and ergonomic advantages. The new clamping nuts have decreased our die-change times by at least 4 min. per change.”

An added bonus with the new nuts: They will fit 90 percent of the facility’s dies without modification, fitting into existing die slots. And, the nuts lend themselves to a more organized die-change procedure. The project team created Creform (Greer, SC) kitting carts at each press to organize and store the nuts. In this way, the die setters have visual cues that eliminate any chance that a nut is either missing from the die (during die setting) or remaining in the die (during die removal).

“Half of our dies were not designed in-house; they came from other facilities,” adds Webb, “which created a challenge when we looked at standardizing on quick-change equipment. For example, we couldn’t find another mechanical solution or a magnetic system, that would work with such a high percentage of our dies when taking into consideration the frequency at which we change dies and our vast range of die sizes (as large as 9 ft. long and 4 ft. wide).”

No Chance for Error

The plant’s mission to add the hydromechanical nuts to its presses kicked off this past May when it added 72 of the nuts to the stainless line, another 72 sets were added to a wrapper line at the end of June, and Stewart filed another purchase order to outfit more presses by the end of September.

“The die setters love the new clamping nuts,” Stewart says, “and I can’t wait to get them on all of the presses. We’re eliminating opportunities for die damage, and we’re reducing our changeover times.

“Using the nuts couldn’t be simpler,” Stewart continues. “The setter slides the T-bolts and clamping nuts into the slots on the press bed, then hand-tightens the nuts to secure them against the die. He then makes one or two turns with a 6-in. ratchet to reach the required torque. A button pops on the nut at that point—no chance for error.”